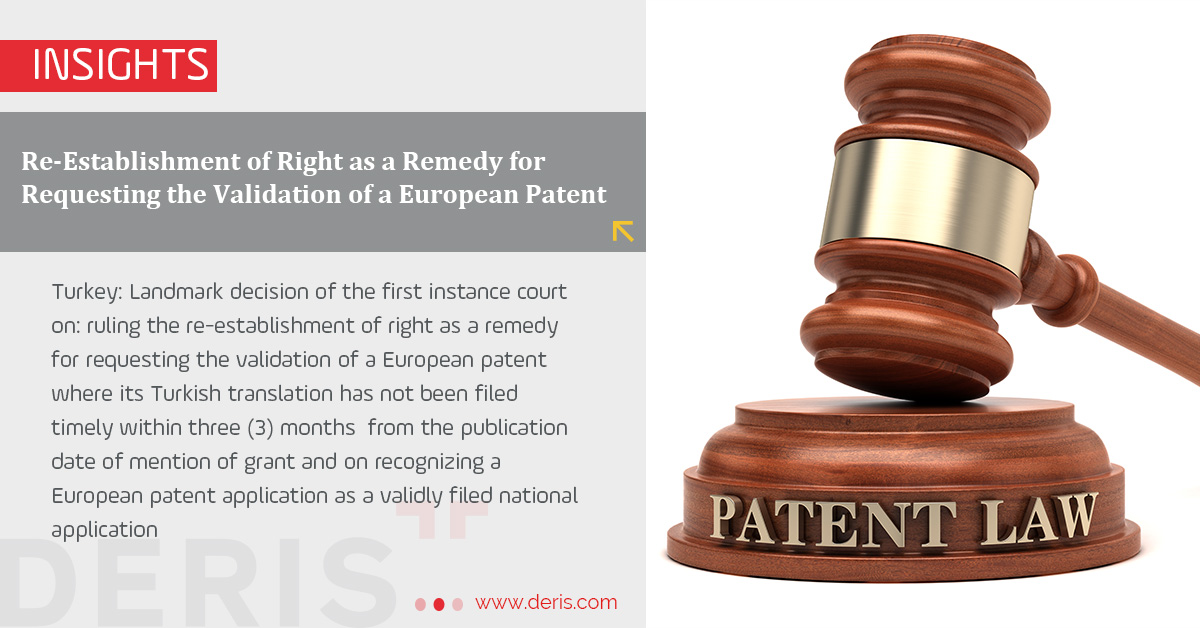 Turkey: Landmark decision of the first instance court on: ruling the re-establishment of right as a remedy for requesting the validation of a European patent where its Turkish translation has not been filed timely within three (3) months  from the publication date of mention of grant and on recognizing a European patent application as a validly filed national application

It is a welcome development that "re-establishment" is introduced in the new Turkish Intellectual Property Code no. 6769 in force as from 10.01.2017 furthering harmonization with European Patent Convention as it was not admitted under the earlier practice because the repealed Decree-Law no. 551 pertaining to the protection of patents and utility models in Turkey did not contain such a provision.

In fact, the Article 107/2 of the new IP Code, mirrors the contents of the Article 122 of the EPC. However the practice of the Turkish Patent and Trademark Office is yet to be settled, for instance, in respect of European validations not completed within the deadline of three months as from the publication of the grant decision by the EPO are waiting the decision of the Turkish Patent and Trademark Office/TPTO for re-establishment.

In a recent case where a request of validation of a European patent which was not filed before the TPTO within the three months following the date of publication of the grant decision and no request for extension of term for submitting the Turkish translation was filed within the same period,  a request for re-establishment has been submitted by the patentee before the TPTO by evidencing that the due care has been taken for the timely filing of the validation within the time limit of one year as from the end of the period that has not been complied with.

The decision of refusal of the Board reveals the question as to whether an international application is deemed a national application. The decision of refusal of the Board is not in line with the EPC provisions where a European patent application which has been accorded a date of filing shall in the designated Contracting States be equivalent to a regular national filing.  In the present circumstances the provisions applied by the TPTO are against the Constitutional law which recognizes the hierarchy of norms according to which international law shall prevail over domestic law which is to be aligned with the ratified international conventions. In this sense as Turkey is a signatory of EPC since 01.11.2000, the international norm on “re-establishment” predates the provision of the new Turkish IP Code of 10.01.2017 regarding it.

A court action has been instituted against the decision of refusal of the Board before the Specialized Court for Intellectual Property Rights in Ankara. Considering that there was no jurisprudence on the matter yet, the court appointed a panel of experts including a European patent attorney for the evaluation of the matter in view of the EPC provisions and the practice of the TPTO. The panel of experts decided that the decision of the Board includes incomplete evaluation in view of any reference to the international law and that the legal grounds for the application of the re-establishment of rights as a valid request are met.

Following the issuance of a favorable report by the panel of expert the court has decided in favor of the patentee and concluded to the cancellation of decision of the Board. In the motivated decision, the court refers to the superiority of the international agreement of the EPC and particularly to the articles 64, 66 and 67 and concluded to the incomplete evaluation by the Board of the international provisions for the status of an international application/patent as a national application/patent. The decision is in the appeal phase now.

It will be interested now to see the reaction of the TPTO as to the application of the court decision in the current pending cases for re-establishment of a European patent for late filing of the Turkish translation. The main question is whether this landmark decision of the court will be specific for the present cancellation of the decision of the Board or whether the TPTO will change its current stance and apply the same to other similar cases. In the past, we have experienced situations where court decisions on legal points which were not shared by the TPTO served only as a decision for the concerned case and have not been applied to other similar cases. Such practice obliging to take the matter to court for every other case on the same practice and legal points. This means that each time the decision of refusal of the Board should be appealed before the court for the re-establishment of the patent right.

We sincerely hope that the TPTO will change its stance and practice on the above points provided the case is favorably finalized.