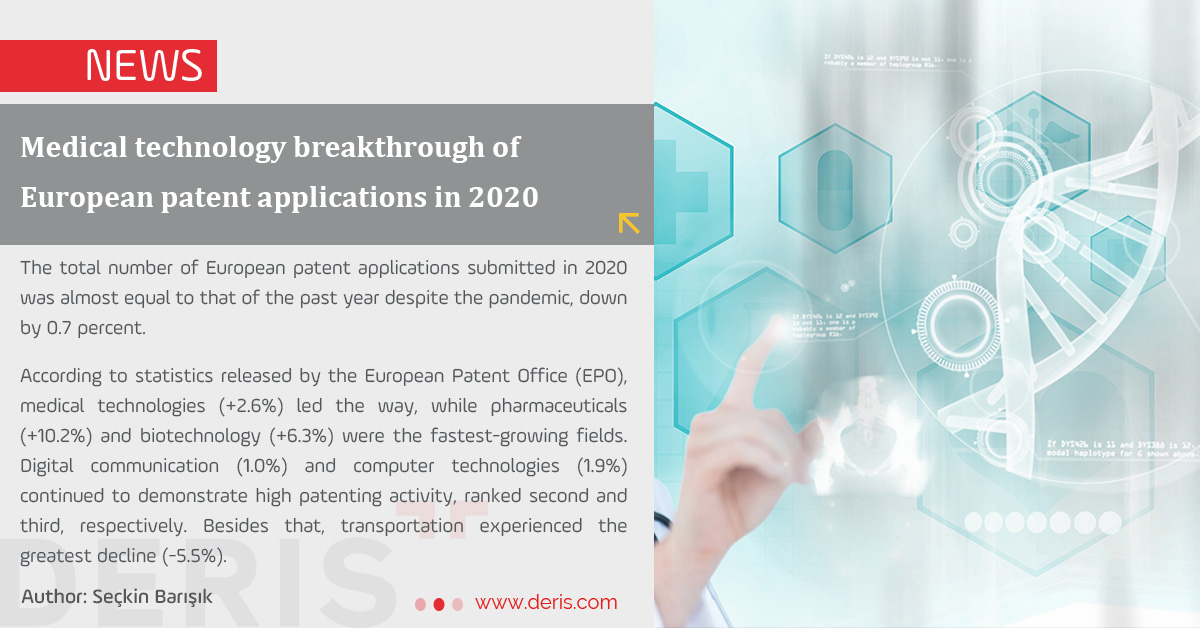 The total number of European patent applications submitted in 2020 was almost equal to that of the past year despite the pandemic, down by 0.7 percent. According to statistics released by the European Patent Office (EPO), medical technologies (+2.6%) led the way, while pharmaceuticals (+10.2%) and biotechnology (+6.3%) were the fastest-growing fields. Digital communication (1.0%) and computer technologies (1.9%) continued to demonstrate high patenting activity, ranked second and third, respectively. Besides that, transportation experienced the greatest decline (-5.5%). 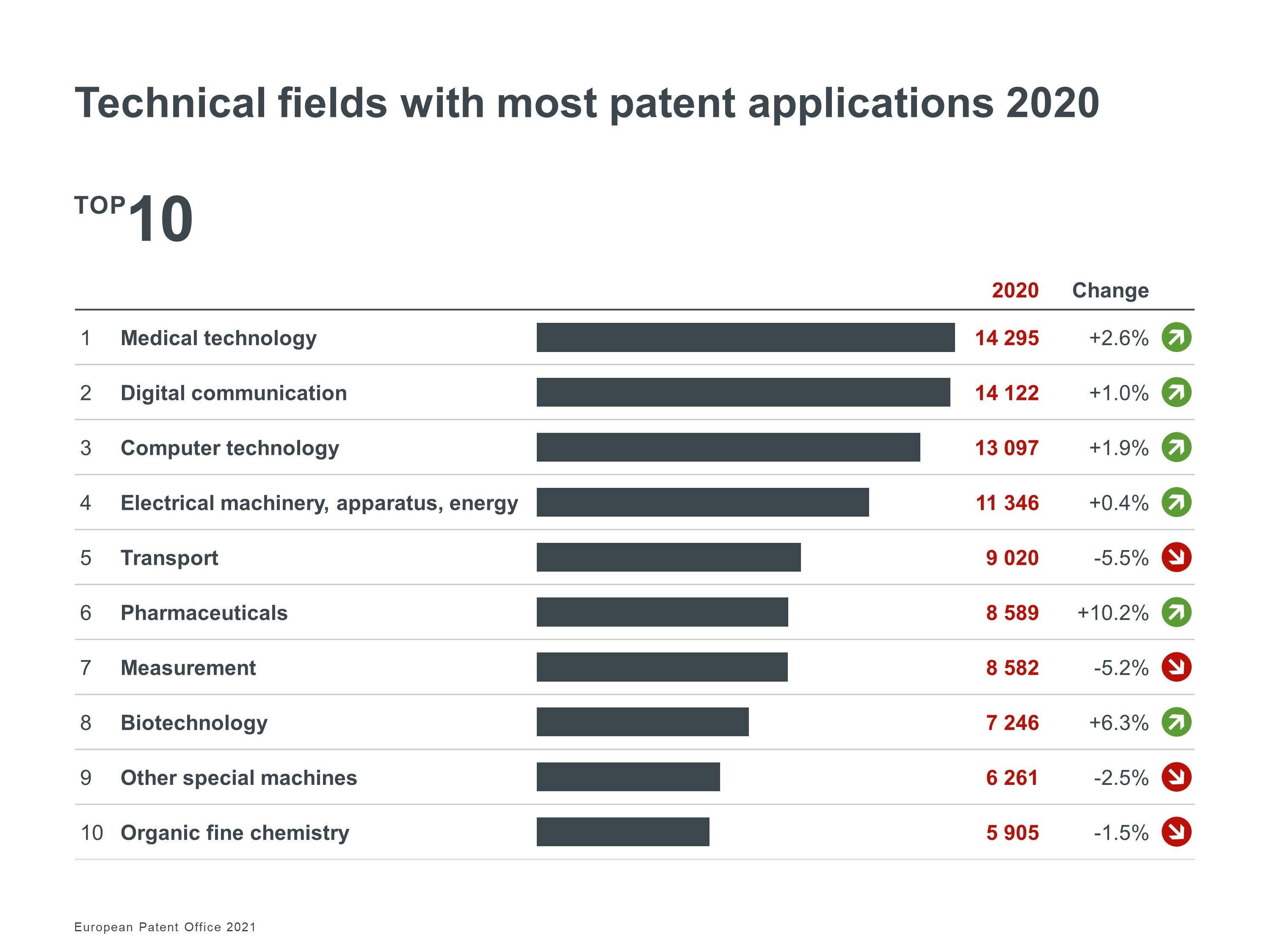 Figure 1 Technical fields with most patent applications in 2020

In 2020, the top five countries in terms of geographical sources of inventions were the United States (44293), Germany (25954), Japan (21841), China (13432), and France (10554). US patent applicants submitted 4.1 percent fewer patents, with major drops in transportation, electrical machinery/apparatus/energy, and organic fine chemistry. Patent applications by the Japanese were down 1.1 percent from the previous year, with transportation and optics seeing the highest drops. Chinese (+9.9 percent) has the highest rises among the top ten nations, with more applications filed in biotechnology, electrical machinery/apparatus/energy (where many innovations are renewable energy), and digital communication. South Korea (+9.2 percent) was the other country with a significant improvement in the top ten, and it was especially involved in electrical machinery/apparatus/energy, telecommunications, semiconductors, and computer technology.

Companies and inventors from the EPO's 38 member states filed 1.3 percent fewer patent applications due to fewer filings in areas such as measuring (-10.4%), organic fine chemistry (-3.6 %), and electrical machinery/apparatus/energy (-2.8%). 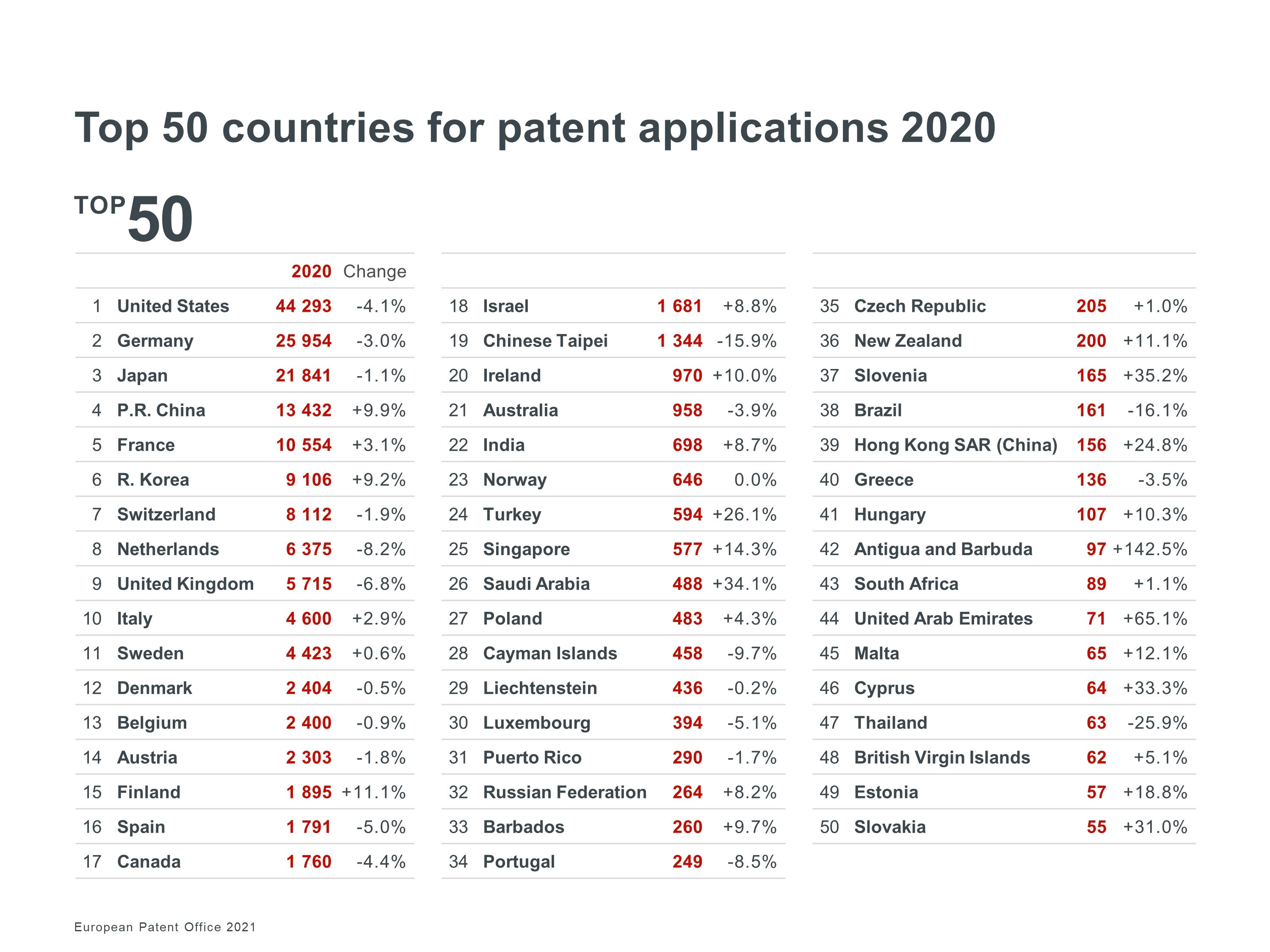 Figure 2 Countries for patent applications in 2020

The top applicant ranking for 2020 also represents China and South Korea's continued rise in patent applications. Samsung leads the table with 3276 applications, trailed by Huawei (3113), which was at the top of the list last year's ranking, and LG in third position (2909). Five of the top ten firms are from Europe, the most since 2014. 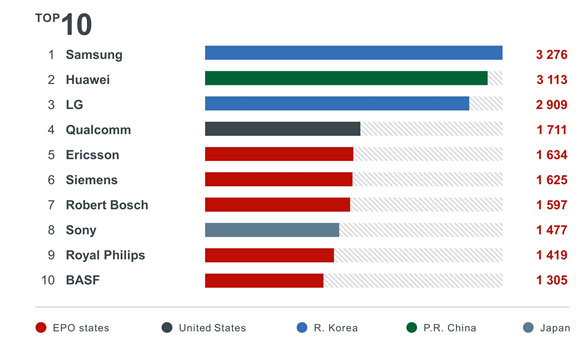