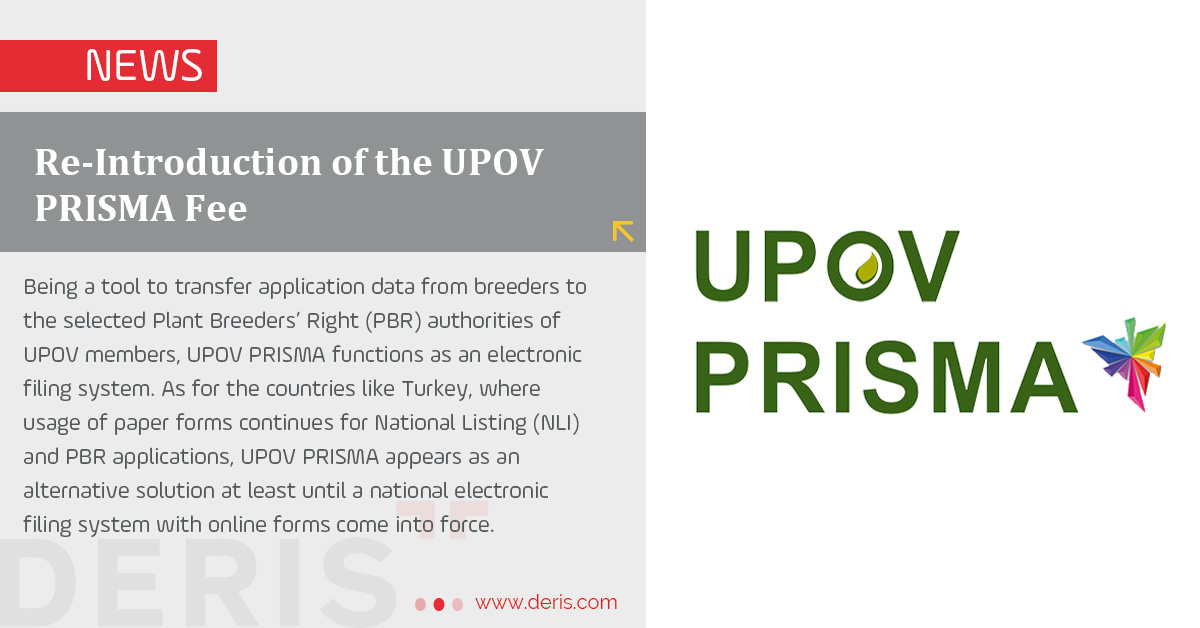 Re-Introduction of the UPOV PRISMA Fee

Being a tool to transfer application data from breeders to the selected Plant Breeders’ Right (PBR) authorities of UPOV members, UPOV PRISMA functions as an electronic filing system. As for the countries like Turkey, where usage of paper forms continues for National Listing (NLI) and PBR applications, UPOV PRISMA appears as an alternative solution at least until a national electronic filing system with online forms come into force.

In return to the advantages provided by the UPOV PRISMA tool, it was settled that an UPOV PRISMA fee is charged independently of the official fee(s) required by the national PBR authorities. However, payment of UPOV PRISMA fee was being postponed on the purpose of promotion since release of this tool in 2018.

In the fifty-third ordinary session of the UPOV Council held on 1 November 2019, the Consultative Committee recommended to the Council to introduce a UPOV PRISMA fee per application at CHF 90, starting in January 2020. It further agreed that, where the same variety was submitted for both PBR and NLI in the same participating member of the Union, a single UPOV PRISMA fee would be charged at the time of the first submission for the variety. Until the above-mentioned session of the UPOV Council, neither amount to be paid nor the date as from which it will be charged was clear. In the second half of January 2020, the recommendation of the Committee brought results and it was announced that new version of UPOV PRISMA (Version 2.4) will be released on 10 February 2020.

Subsequent to a little delay, on 24 February 2020, this new version has been released providing new features and accompanied by the re-introduction of the UPOV PRISMA fee of CHF 90 per PVP application made using this system.

In compliance with the revised UPOV PRISMA terms of use, where it was declared that each member PBR authority agrees not to charge a higher application fee when receiving application data through UPOV PRISMA; the Turkish Authority, General Directorate of Plant Production (BUGEM) lowered the official fees required for PRISMA applications and equalized it with that of a national paper filing.

However, considering that a PBR application filed through UPOV PRISMA route in Turkey replaces a national PBR application filed with paper forms directly before the BUGEM and that the above mentioned UPOV PRISMA fee will be compensated within the costs of such an electronic filing system, it would not be wrong to say that there will be no extra filing costs for Turkey.

Dealing with pre-grant and post-grant PBR proceedings since the effective date of the Turkish Law No. 5042 on Protection of Breeders’ Rights for New Plant Varieties, 08 January 2004, we are pleased to share with our client’s other cost and process advantages brought by UPOV PRISMA specific to Turkey.